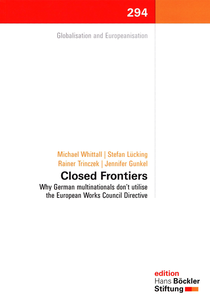 In 1994 the European Works Councils Directive was adopted. It marked a major breakthrough for workers’ representation at the European level. Twenty years later, however, the outcome of this legal provision remains ambivalent. While around 1,000 multinationals have set up a European Works Council, a considerable number has failed to take advantage of this legal option. The lack of implementation is particularly pronounced in Germany, a country with well-organized works councils. Hence, the question arises: What factors prevail that wittingly or unwittingly hinder German employee representatives from setting up a European Works Council? Based on a research project funded by the Hans Böckler Foundation this book provides possible answers to this question. As will be demonstrated, four reasons appear to explain the dearth of EWCs in German firms. These include, (1) a knowledge deficit about the legal provisions and a lack of transparency regarding company structure; (2) limited resources and the uncertain added value of a European Works Council; (3) attitudes of German employee representatives regarding foreign subsidiaries; and (4) different types of internationalisation.